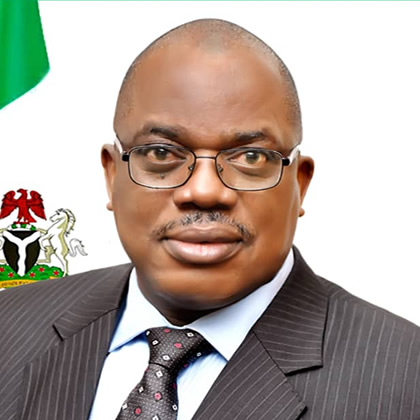 Mr.Adesola, a bureaucrat and administrator per excellence took over from Sir Chinyeaka Christian Ohaa who was recently deployed to Federal Ministry of Power.

Mr.Adesola, at a time was Permanent Secretary, Federal Ministry of Sports and Youths Development, where he also recorded some sterling feats in the country’s football administration. Some of these led to both national and international laurels.

He was born on 18th March, 1964 and hails from Akoko North East Local Government Area of Ondo State. Mr.Adesola started his working career in 1988 with the then Nigerian Agricultural Cooperative Bank, Kaduna State, where he did his one year mandatory National Youth Service Corps (NYSC).

In a bid to broaden his service to the nation, having contributed his bit to the development of Kaduna State, in 1998, Mr.Adesola transferred his services to the mainstream Civil Service where he had gradual and steady rise until his appointment in August 2017 as Federal Permanent Secretary by President Muhammadu Buhari as a result of his dint of hard work, dedication and loyalty.

He is happily married and blessed with four children and determined to deploy his wealth of experience gathered over the years to advance the change mantra of President Muhammadu Buhari in line with the strategies of the present FCT Administration under the able leadership of FCT Minister, Malam Muhammad Musa Belo and FCT Minister of State, Dr.Ramatu Tijjani Aliyu.